IHI has been awarded an EPC contract to construct two of India’s largest LNG storage tanks by GSPC LNG Limited (GLL) at the Mundra LNG Terminal in the State of Gujarat. The two tanks will each have a net storage capacity of 160,000 m3.

Demand for LNG is constantly growing worldwide, with India playing a major role in the total increase in LNG demands. India currently has a total LNG receiving capacity of 25 Million Metric Ton Per Annum (MMTPA), with an additional 5 MMTPA to come online upon completion of the Mundra LNG Terminal. Plans for an additional 15 MMTPA of LNG import are also currently under development.

As a pioneer in the LNG business, IHI has over 40 years of experience in LNG Receiving & Regasification Terminal and Cryogenic Tanks construction projects since it constructed the first LNG terminal project in Japan. Over the years, IHI has gained global EPC experience in countries such as India, Mexico, Taiwan, China and the United States. With this award, IHI will continue to assist the growing demand for LNG. 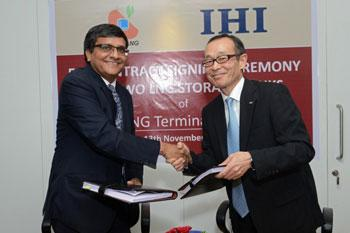