Nam Ngiep 1 Hydropower Plant Project is located in Bolikhamxay Province in the middle of Lao PDR (Approx. 150 km northwest from the capital, Vientiane) along the Nam Ngiep river, a tributary of the Mekong River. NNP1PC will construct, own and operate the Dam with its height of 148m and crest length of 530m, and two power plants of 272 MW and 18MW of generation capacity. The Project is carried out according to the concession agreement between Government of Lao PDR and NNP1PC. Most of the electricity produced at this plant will be sold to Electricity Generating Authority of Thailand (EGAT) and partially to Electricite du Laos (EDL) for 27 years, based on each power purchase agreement with EGAT and EDL.

Major facilities of IIS’s work scope include 4 Spillway gates, 2 Intake gates, 2 Draft gates and 2 sets of Penstocks. It will be the largest concrete dam in Lao PDR with its total storage capacity of 2.2 Billion m3 which is 11 times bigger than the Kurobe dam in Toyama Prefecture, Japan. (Approx. 200 Million m3)

IIS is committed to the successful completion of the project and contributes to the Lao PDR’s economic development by promoting efficient use of their abundant water resources.

*1 NNP1PC is a Special Purpose Company (SPC) established in April 2013. It is organized from 3 sponsors and its share holds is as follows; 45% by KPIC Netherlands B.V. (KPN), a 100% subsidiary of Kansai Electric Power Company Incorporated of Japan, 30% by EGAT International Company Limited (EGATi), subsidiary of Electricity Generating Authority of Thailand, and 25% by Lao Holding State Enterprise (LHSE), 100%subsidiary of the Government of Lao PDR. 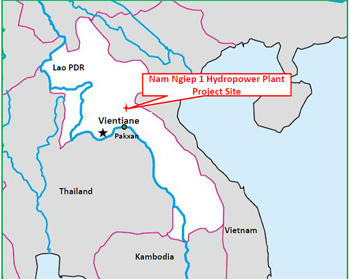 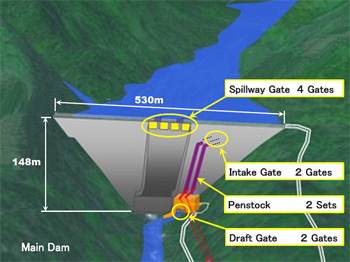