Sumitomo Forestry Co., Ltd. (President and Representative Director: Toshiro Mitsuyoshi; Headquarters: Chiyoda-ku, Tokyo; hereinafter “Sumitomo Forestry”) and IHI Corporation (President and CEO: Hiroshi Ide; Headquarters: Koto-ku, Tokyo; hereinafter “IHI”) announced today that they have agreed a business alliance for a “Forest Management Consulting Business” and for “the development of a sustainable business that maximizes the value of natural capital” . The two companies start a partnership aimed at realizing a consulting business for the appropriate management of tropical peatlands*1, and also work together to create and provide high-quality carbon credits*2 by assigning appropriate value of natural capital, such as according to the volume of carbon stock in forests and soil.

Among Sumitomo Forestry’s core strengths are the forest management techniques it has cultivated both in Japan and overseas, management techniques for degraded tropical peatlands in Indonesia, which is the only successful case in the world; and the accumulation of ground measurement data.
The IHI Group’s strengths include technologies for utilizing satellite data, which it has honed through many years in space exploration, and meteorological observation/forecasting technologies.

The two companies intend to combine their respective strengths to develop methods of tropical peatland management techniques for expanding the techniques globally, and launch a consulting business in 2022.
In addition, we will develop methods for accurately evaluating and monitoring the amount of CO₂ absorbed by vast forests. We will also seek to create “high-quality carbon credits” by adding values of forests as natural capital*3—this includes their benefits such as preserving biodiversity and water cycles, and contributing to local communities, as well as carbon absorption in the fight against climate change. In this way, Sumitomo Forestry and IHI will tackle the global environmental issues with the outstanding technologies of the Japanese companies.

*1 “Tropical peatland” refers to areas of land formed by the accumulation of plant remains that have not decomposed in water.
*2 “Carbon credits” refer to tradable certificates for greenhouse gases emissions reduction. When emissions are circulated between companies or countries, they are traded as credits; the unit of transaction is 1t-CO₂.
*3 “Natural capital” refers to the world’s assets of natural resources which provide precious services and benefits such as absorbing CO₂ and purifying water to all of the living human beings on the earth.

The Japanese government has pledged to become carbon neutral by 2050, while foreign governments, companies, and investors are accelerating decarbonization initiatives for 2050 in line with the Paris Agreement. In addition, the Japanese government has announced its intention to reduce its greenhouse gas emissions by 46% in 2030 compared to 2013 levels, up from its previous goal of 26%. In contrast to methods of reducing carbon emissions, forests are capable of absorbing and fixing CO₂, and for this reason they are set to play an exceptionally important role when it comes to achieving carbon neutral.

However, forests are more than just carbon sinks; in recent years, their value in preserving biodiversity has been highlighted. The 15th Convention on Biological Diversity Conference of the Parties (CBD COP-15) will take place in Kunming, China, in 2021, where the Post-2020 Biodiversity Framework—a new set of global goals—is set to be ratified.

The majority of tropical peatland soil is composed of water; the remainder comprises organic matter such as plant remains that has been deposited without completely decomposed. Tropical peatlands exist in Southeast Asia, the Congo basin, and the Amazon region; they cover a combined total of more than 50 million hectares worldwide (approximately 1.3 times the land area of Japan), and store approximately 119 billion tons of carbon (more than 10 times the global carbon emissions in 2017).

Peatlands become extremely flammable if their groundwater levels fall and they dry out; for this reason, water management is incredibly important to conserve peatlands. Indeed, the smoke damage caused by peatland fires, as well as the carbon they release into the atmosphere are major global issues. In 2015, it is reported that peatland fires in Indonesia led to the loss of approximately 4.6 million hectares of peatland, releasing 890 million tons of CO₂—equivalent to 2.5% of the total worldwide CO₂ emissions that year.

3．Value of forests as natural capital, and carbon credits: current status and issues

The estimation of carbon sink capacity of forests using existing technologies are beset by accuracy issues due to a dearth of comparative actual measurement data. Even though forest resources make major contributions to fighting climate change, at present the value of carbon credits produced from forest resources does not properly reflect their capacity for carbon storage.

Proper forest management helps preserve biodiversity and contributes to local communities, and prevent or mitigate disasters by limiting extreme weather conditions and fires. However, systems for evaluating the value of forests as natural capital as mentioned above have yet to be established.

In developing countries in particular, forests are at risk of disappearing and degrading due to illegal logging, fire, and conversion into other land uses. Statistics show that from 2015 to 2020, an average of approximately 10.2 million hectares of forest were lost per year; 9.28 million hectares—or roughly 90%—of this forest was lost in the tropics. Going forward, properly managing forests and maintaining their conditions are set to become key issues.

As part of its plantation forest operations in Indonesian peatlands, Sumitomo Forestry has established management techniques that ensure stable groundwater levels throughout the year and prevent peatland fires. This is the result of five years’ efforts of topographical surveys and boring surveys, and 10 years’ efforts of on-site trial and error.

The company has also gathered ground measurement data related both to trees and peatland soils across more than 100,000 hectares of the forests it manages in Indonesia, in the only initiative in the world that covers such a large area and that has been carried out over such a long period.

As part of their business alliance, Sumitomo Forestry will share its forest and peatland ground data with IHI; it will also use company-owned forests both in Japan and overseas to demonstrate and verify the accuracy of measurement technologies developed by IHI.

Sumitomo Forestry will undertake to acquire and properly manage forests in order to create carbon credits, to utilize forests through sustainable forestry practices, and to preserve biodiversity and contribute to local communities. 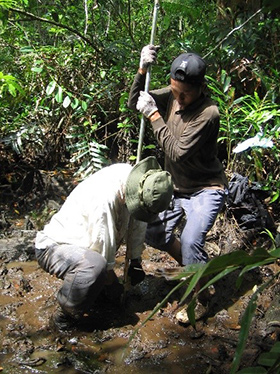 For 68 years, the IHI Group has worked on rocket development and satellite propulsion systems, and has become a key component of Japan’s space exploration program. The Group has also been involved for many years in the utilization of satellite data, and is in the process of establishing independent solutions based on this data—such as high-accuracy, long-term weather forecasting, using a combination of satellite data and AI and IoT technologies. MEISEI ELECTRIC CO., LTD., an IHI Group company, owns technologies capable of measuring meteorological data such as atmospheric temperatures, atmospheric pressures, and rainfall volumes, and delivers measurement devices to public authorities and other organizations around the world. 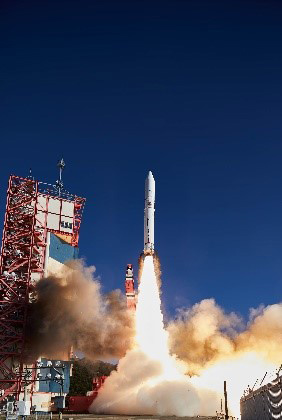 The launch of Epsilon-4, a rocket which
the IHI Group helped to develop ⒸJAXA

In order to create “high-quality carbon credits”, IHI intends to use satellite data and meteorological measurement technologies to establish concrete methods for calculating the value of forest resources as “natural capital”. 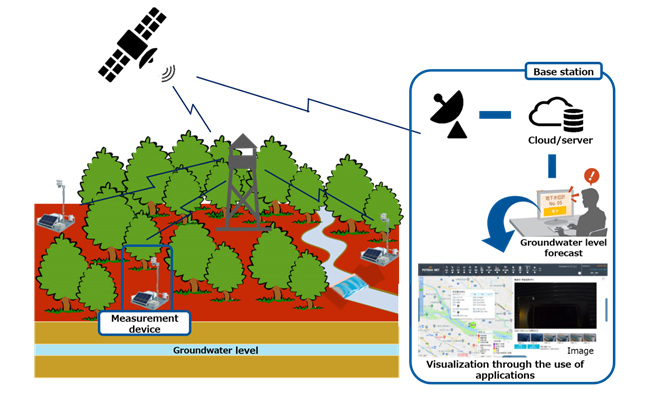 The conservation and proper management of tropical peatlands is critical for achieving carbon neutral, and for preserving the biodiversity and water cycles necessary for living condition of human beings. Proper management requires water level management technologies and other technologies to be widely available, easy to apply, and affordably priced.

IHI is currently developing groundwater level forecasting systems, while Sumitomo Forestry has already established the peatland and forest management techniques; through their business alliance, the two companies will develop technologies to spread the management techniques to Indonesia and other countries with tropical peatlands. The two companies intend to commercialize the technologies in 2022 in the form of a consulting business that promotes their adoption and operation in forests around the world.

Sumitomo Forestry and IHI also intend to visualize and assign fair value of forest resources as “natural capital”—not only according to their capacity to absorb carbon, but also according to the benefits they provide in preserving biodiversity and water cycles, and in contributing to local communities. In this way, the two companies will seek to create and provide “high-quality carbon credits”.

By publicizing the results of the above initiatives via international conferences and scientific papers, Sumitomo Forestry and IHI hope to create models of carbon credits market that are recognized internationally, and so establish a sustainable business for resolving global environmental issues.

Sumitomo Forestry is involved in a wide range of business activities both in Japan and overseas, including forest management; the procurement, processing, distribution of timber, construction; and biomass power generation fueled by unused forest wood and construction waste. For this reason, the company is able to contribute both to carbon fixation and CO₂ emissions reductions in every part of the value chain. In addition to the economic value generated by its business activities, Sumitomo Forestry seeks through its management to enhance its public benefit value—which comprises environmental and social values, such as preserving biodiversity, suppressing greenhouse gases, and securing labor safety and employment—and to contribute to the achievement of SDGs and the realization of a decarbonized society.

IHI intends to grow its partnership with Sumitomo Forestry into a highly sustainable business that promotes coexistence with nature; at the same time, as part of its efforts to resolve global-scale issues and protect this beautiful earth, the company swiftly materialize a zero-carbon, circular economy, and to prevent and mitigate disasters. By providing a diverse range of solutions—including hydrogen, ammonia and carbon recycling, and electrification of aircraft —IHI seeks to achieve carbon neutral.