IHI has succeeded in reducing greenhouse gases by over 99% during combustion of liquid ammonia in a 2,000-kilowatt-class gas turbine achieving truly CO₂-free power generation. 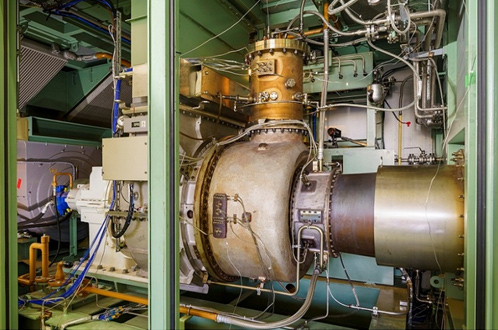 As ammonia (NH₃) does not contain carbon (C), it can be used as a fuel in existing power generation facilities as a fuel which does not emit CO₂ when combusted. The combustion method which IHI is pioneering involves liquid ammonia being directly sprayed into the gas turbine combustor, which presents numerous advantages for social implementation, such as the simplification of the liquid ammonia fuel supply system from the storage tank to turbine, as well as improved controllability.

However, compared with natural gas and gaseous ammonia, liquid ammonia has an inherently lower flammability, making it harder to burn; one of the challenges for high co-combustion ratios of liquid ammonia has been the Stable ammonia combustion, and suppression of greenhouse gases in the exhaust gas stream. Until now, when operating gas turbines at ammonia co-firing rate of over 70%, nitrous oxide (N₂O) which has a greenhouse warming effect around 300 times that of CO₂, was susceptible to formation, nullifying the effect of reducing CO₂ emissions.

As a result of mounting and testing a newly developed combustor on the 2,000-kilowatt-class gas turbine at IHI Yokohama Works, we were able to achieve a greenhouse gas reduction rate exceeding 99%, even when the ammonia fuel ratio is at 70~100%, and we verified the output of 2,000kW when mono-firing liquid ammonia. Looking forward, we will further reduce NOx levels, improve operability, evaluate long-term durability, and proceed with efforts toward the practical application of a 100% liquid ammonia combustion gas turbine in 2025.

The IHI group is committed to the contribution towards to realization of a carbon-neutral society by 2050 via providing carbon-neutral solutions, such as carbon recycling technology for the effective use of CO₂. IHI is actively promoting the creation of Hydrogen / Ammonia value chains, and developing projects that will produce CO₂-free, Green ammonia in regions with an abundance of renewables and renewable electricity access.